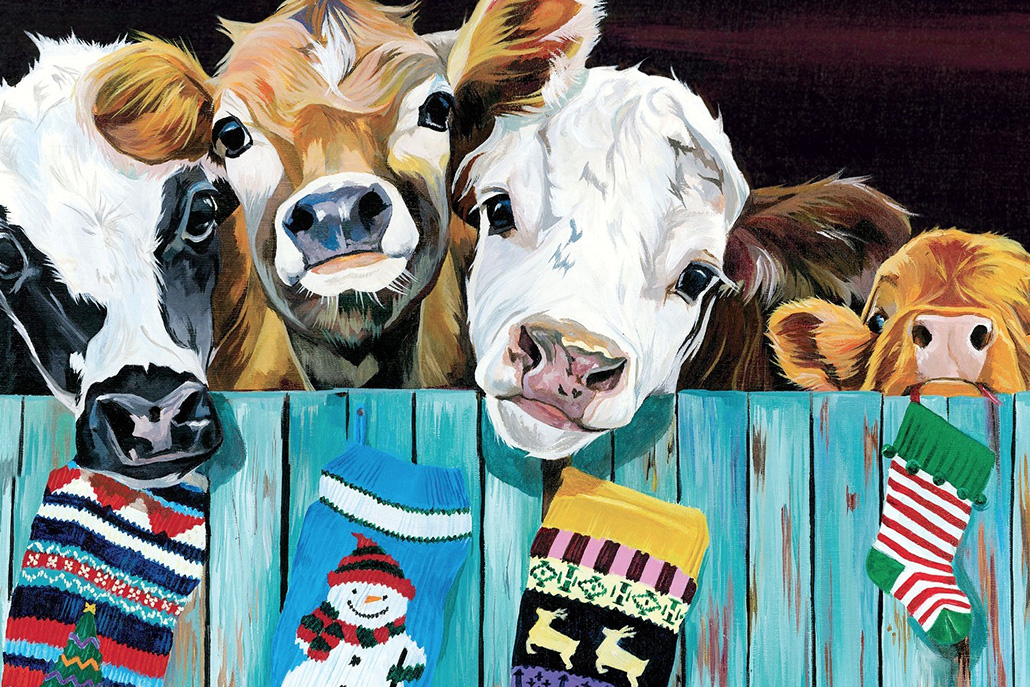 A Christmas Classic with a twist!

The Night Before Christmas by Lauren’s Cows

Everyone knows the Christmas classic ‘The Night Before Christmas’ well I decided that we needed a farm yard version, featuring our favourite animal! The Cow. I’m sure it will be soon be read in every home at Christmas.

The Night Before Christmas, by Lauren’s Cows

Twas the Night Before Christmas and all through the farm pens, Not a creature was stirring not even the hens. The stockings were hung in the parlour with care, With hopes that St. Nicholas soon would be there. The heifers were snuggled up warm in their shed, While visions of silage bales danced in their heads.

The calves were all cozy and the bull with his horns, Would be snoring and dreaming straight through till dawn. When out in the yard there arose such a din, They all sprang to their feet to see what was happ’ning. To the gate they stumbled still half asleep, Stuck their heads through the bars and had a good peek New fallen snow on the ground did lie, But other than that there was nothing to spy.

When suddenly out of the snow did appear A whopping great sleigh and a heap of reindeer The little old driver wasn’t lively or quick, But they knew from his suit that this must be St. Nick. Less nimble than usual he fell to the ground, And cursed the reindeer that were scattered around. “Ow Dasher, Ow Dancer, Ow Comet and Vixen! Bad Prancer, Bad Cupid, silly Donner and Blitzen
Eight reindeer leading and not one sees a wall! Now how are we meant to dash away all?” Then Santa spotted the cows in a row, And his once frowning face lit up with a glow!

With his question he sprang with a leap and a bound, “How do you Cows fancy Leaving the ground?” A twinkle in his eye Santa opened the gate, And into the snow went the black and white eight.
“No time for nerves, there is work to be done, but please do not fret, we’ll have loads of fun!” Each cow was harnessed and hitched to the sleigh with Bronco the bull proudly leading the way. With some Christmas magic they’d soon be in flight, Delivering presents all through the night. Onto the sled the Jolly fat man did sit, “Now brace yourself friends here comes the best bit! Now Mabel, Now Maisie, Now Daisy and Lulu! On Bronco, On Gertie, On Topsy and Fru-Fru! To the top of the Barn, to the top of the wall, Now Dash Away, Dash Away, Dash Away All!” He was chubby and plump not a light load to lift, But with a bit of teamwork they were off in a jiff.

With a heave and a ho they were off at a trot, And before you could say dairy the farm was a dot They soared over rooftops like birds of a feather, As a Christmas tune rang from the bells on the leather. To Scotland, China, Magaluf, Isle of Wight, To each house in the world they took presents that night Soon it was dawn time for Santa to leave, Back to bed when the cows having saved Christmas Eve, But they heard him exclaim ere he drove out of sight…

Merry Christmas to all! And to all a Goodnight!