THE STORY OF STINGY JACK

The pumpkin has become the symbol of Halloween, from horror films, to carving competitions and of course tasty autumn dishes, the Pumpkin is KING of October. But have you ever wondered about the origins of the Halloween Pumpkin?

Well I decided to look things up for you!

I always assumed it started in America at the time of the Salem witch hunts. But I was wrong. Although the ‘Jack-O-Lantern’ may seem like a very American thing it’s actually Irish dating back to ancient celtic times. There’s an Irish folk tale that speaks of Stingy Jack! 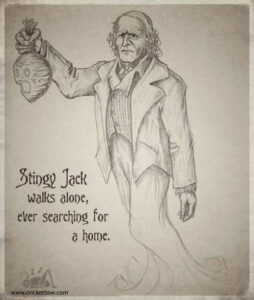 DRINKING WITH THE DEVIL

Stingy Jack invited the Devil himself to have a pint with him, however stingy by name, stingy by nature he tricked the Devil into picking up the bar tab. Of course the Devil was best pleased about this, so took his revenge by, when his time came, denying Stingy Jack entry to the afterlife making him wander the earth in the dead of night for all eternity. He was given a single coal ember to guide him which Jack would place in a hollowed-out turnip, giving him the name ‘Jack of The Lantern’ or Jack-O-Latern.

The Celts would carve produce such as swedes and turnips and other such veg to scare Stingy Jack away while lighting the way for good spirits. (I thought I was being fobbed off when my Gran gave me a swede to carve rather than a Pumpkin but that’s how it all began!) 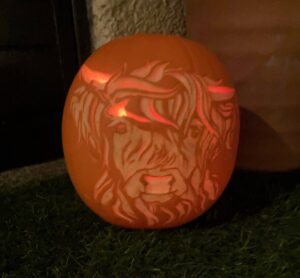 SO WHERE DOES THE PUMPKIN COME IN?

It was only when The Irish started emigrating to America in the 1800’s that the carved pumpkin became a thing. Pumpkin’s were in abundance and way better for carving than a turnip! The tradition of Pumpkin Carving at Halloween stuck and has become much loved tradition at Halloween. Today we are lucky enough to have pumpkins in abundace come Autumn

So now we know!